The ability to "experience things deeply" is part and parcel of what makes someone a Highly Sensitive Person.

Unfortunately, we often tend to hone in on the negative and painful experiences far more than the positive ones. 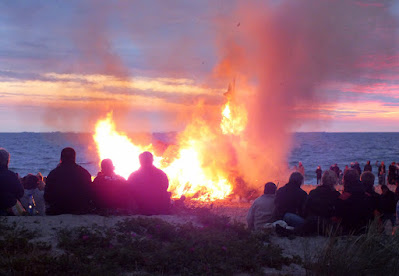 Today is June 24th. In my native Denmark, it is the celebration of "Sankt Hans Eve," a form of midsummer celebration mostly observed in Scandinavia and Northern Europe... for me, this day offers one of the consistently positive memories from growing up.

What was special about June 24th? Aside from marking almost the longest day of the year in Denmark-- the sun rises around 4:30 in the morning and sets around 10:00pm; it never gets truly dark-- this time also meant that school was out for the summer and I had a small measure of freedom to be myself.

Sankt Hans eve, itself, had its own kind of magic as thousands of bonfires are lit all across the country-- many on beaches-- and communities come together and the world somehow felt "a little more peaceful," even if just for one day. The photo above was taken during a summer visit to Denmark, in June 2011.

As a teenager, I would ride my bicycle home from the beach late at night...often at 1:00 in the morning... the scent of woodsmoke hanging in the air from all the fires; hollows in fields filled with low lying mists and the world would feel like it was of another era, or maybe not our world, at all. The northern sky would be orange and pink because the sun only dips a few degrees below the horizon and on cloudless nights it was light enough that I could still see colors.
As much as anything, it felt like I was somehow "connected" to the world around me.