I'd like to continue to explore the importance of "staying true to what matters to you," especially as it applies to HSPs.

Before I get started, though, I want to address a couple of private comments that arrived in my in-box as a result of my last post-- mostly relating to my being chided for taking the "Pink Fluffy Bunny Self-Growth Movement" to task.

If you re-read what I wrote, you'll see that I did NOT dismiss the "sweet and eternally sunny" approach to healing-- I merely suggested that it might be best suited to the neophyte, both with respect to learning about being an HSP, and subsequently entering a period of meaningful self-growth. The problem is that as the "student" advances, he or she runs an increased risk of getting "stuck" as more difficult questions-- NOT suited to being "lightfooted" over-- arise.

The second thing I'd like to say concerns the misconception that HSPs are-- by definition-- "all sweetness and light." Whereas it may make HSPs feel nice, warm and fuzzy to hold this belief about being sensitive, such an idea has little basis in truth and actually does us a great disservice... in a way it creates a false pressure to conform to something that is not real, like (for example) societal messages about "ideal body type." "Sensitive" does NOT equal "nice." Sensitive equals... well, sensitive. And I'm not even sure what the word "nice" means. 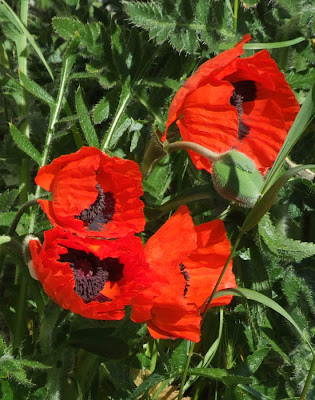 I believe that Staying True to What Matters is an enormously important concept. I say this not merely from personal experience, but from what I observe in those around me. On the whole, the most content people I come across are those who are pursuing their True Callings-- be it in work, in Love, spiritually, intellectually or whatever. As I said last time, HSPs are all about finding authenticity. What is also often true is that those in their Calling are willing to make certain sacrifices to BE in such a place.

Turning our backs on our authentic selves can have disastrous results. On the whole, the most depressed people I know are NOT the ones who are "drifting aimlessly," but the ones who have a good idea of "what they want most," and then erect a carefully crafted "Mountain of Reasons" why they "can't" follow their bliss.

"Yeah, that's easy for YOU to say. It's just not that simple. You have no idea how hard my life is."

"I have no idea who I am, nor any idea how I'd go about finding out."

"I can't just do that, because I have family, obligations, job, children, image, anxieties, fill in the blank."

All of the above are absolutely true! At the same time, they are also "not true," in the sense that they are ultimately excuses and rationalizations. And they tend to be firmly anchored in a world of absolutes ("Either/Or thinking") with no room for nuance, and sometimes even in a toxic pattern of compulsively "being the martyr" who wants something but "just can't HAVE it."

When you scrape beneath the surface, what often reveals itself is that we realize that we do have choices and free will, and that choices have consequences... and we're simply not willing (or ready, or we're fearful of) to face unpleasant consequences and negative feedback when we make certain choices. We're so deeply anchored in "what the world thinks about us" that we completely forget to consider what WE "think about us."

Allow me to share a favorite quote, by American writer Rita Mae Brown:

"The reward for conformity is that everyone likes you but yourself"

When you fail to respond to something your inner wisdom knows to be true, you are-- in essence-- conforming to some kind of outside influence. You are giving up your right to speak for yourself, instead allowing "the world" to speak for you.

If what you want to do is climb mountains, don't say "I can't do that!" and throw up a bunch of rationalizations. At the same time, nobody expects you to selfishly abandon your family and job and run off to climb a mountain. Instead, find a way to gradually incorporate mountain climbing into your existence. But don't lose sight of you want!


Talk Back: Do you know that there is something you truly want in life? Are you making sure it "matters" in your life? Are you making excuses and rationalizations to NOT reach for what matters most to you? What are your reasons?
Posted by Peter M at Monday, January 25, 2010