Being an HSP... and the Intrusion of Noise

We are out "camping" this week. I put that in quotes because we have a cabin, so it's not exactly primitive camping, but it's still a way to get closer to nature, which has always felt very healing, to me.

Being out here where there is no man-made noise reminds me of just how "loud" our everyday lives have gotten. I am not talking about the obvious like the sound of trucks passing in the street, air conditioners humming and someone using a power lawn mower-- I am talking about "the little things." 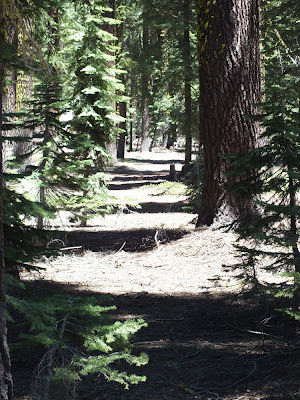 It would be an exaggeration to say that noise has always been my "enemy," but-- that said-- I can honestly say that I have sought "quiet spaces" since I was a small boy. Looking back on my early life, I can see how I responded to "noisy" activities and environments and conclude "Yes, I can now see how I was an HSP," during those early years. Back then, there was no such thing as "being highly sensitive," so I was generally regarded as "timid" and "fearful."

We lived near a busy train line, when I was little. My grandfather would walk me down to the end of the nearby field so I could see the trains go by... and he could never understand why I didn't want to, given that I professed a love of trains. In truth, I thought the trains were cool, but the sound of the engines and rail cars rolling by-- from 20 feet away-- was profoundly overwhelming. Everybody thought I was scared of the trains, but I really wasn't-- I was just completely "sensory overloaded" by the noise they made. The sound felt like... someone was stabbing me in the head/ears with sharp needles, straight into the part of my brain that processes sound.

My experience of "noise" remains the same, today. Noisiness-- of pretty much any form-- has a strong component of overwhelm for me... from raised voices, to loud music, to lawn mowers even down to the sound of cellophane packaging being opened on a quiet morning, or a door that can't be opened silently. When I cook or do home maintenance projects I generally avoid "power tools" (mixers, blenders, table saws) in favor of doing things "by hand..." NOT for "philosophical reasons" but because I loathe the noise of machinery.

Whether I call it an "ideosyncracy" or an "issue," my sensitive ears have occasionally led to feelings of alienation because I was never able to equate "loud" with "fun," as the majority of the world's people seem to. Of course, as I write these words, I realize that there are also those who are HSPs who don't mind noise. Or who can listen to music so loud their bones are rattling, but who are driven crazy by the faintest sound of fluorescent light fixtures buzzing. Ultimately, it may not be the sounds, themselves, that identify us as HSPs... but the fact that we are highly aware of noise.

Talk Back: How do YOU experience noise/sound? Do you find that you often notice sounds other people are not even aware of? Does ALL loud noise bother you, or is loudness not really an issue for you? Do certain sounds drive you crazy? Do you consider yourself a "silence seeker?" Do you feel that you have a "relationship" with noise that is shaped by the fact that you're an HSP? Please leave a comment and share your experiences with other HSPs.