This past weekend (August 16th-18th) The White Light Express held its annual conference and retreat, here in Port Townsend, Washington.

I mention this because I am a central part of the organization, and thus have lots of attendant responsibilities. And this annual event find me-- as an introverted HSP-- being on the go and having to be very "public" with lots of people, for several days. 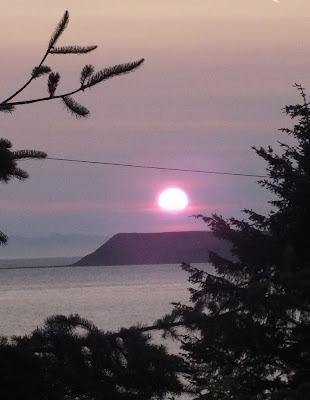 There's a common misconception that introverts-- HSP and non-HSP alike-- are "antisocial" and outright "don't like people." That's simply not not true. I actually like people very much but the act of "socializing" (especially with a large group of mostly strangers) is exhausting, for me.

To truly understand what's going on with an HSP when they declare "I really don't like crowds" is typically far less about "avoiding people" than about "avoiding overstimulation." Although the greater world has a fondness for labeling HSPs as being "shy" or "socially anxious" that characterization actually holds true in far fewer instances than most people would think.

At the end of three days of being "public" and "social," I found myself feeling quite worn out. And even though the 60-odd people in attendance at the conference's "main event" were mainly of like-kind beliefs and orientations, being in close proximity to so many "energies" for an extended period of time was draining. The only thing I really wanted to do with the Monday immediately following the conference was to sit and stare at the wall. Alas, that was not entirely possible, as there were "loose ends" to be chased and closed.

And these were nice people, many with similar interests.

Going into the event, I was already a bit "on edge" given that I was going to be teaching a 3-hour workshop on Sunday. It wasn't that I felt like I didn't know my material, or that I would have to "speak in front of people," it was again about a sense of energy drain... not simply as a result of being an introvert, but as a result of being an HSP and "aware" of other people's energies.

As HSPs, it important that we understand the underlying whys of how we get to feeling exhausted... and that we do not accept external perceptions of us to be "facts." So whenever someone is trying to offer you a "good reason" for your social interaction choices, take a step back and ask yourself whether it really "feels true." Most HSPs are really not shy, or socially anxious... they are just... HSPs.
Talk Back: Do groups of people overstimulate you? Have you ever attributed to "social anxiety" or "shyness" behaviors that might be only the result of being an HSP? Leave a comment!